Hat-trick of wins for Helen, match against London Welsh, and a sucessful Open Morning. 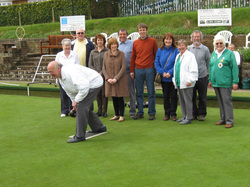 Dave demonstrating to some of the new bowlers
Ladies captain Helen Fillery continued her good start to the season with a hat-trick of wins. After last weekends victory over Bassetsbury Manor, came wins against Amersham and Wingrave. Against Amersham, in the Ladies triples match Chesham won 59 -34, top triple was Mo Bailey, Helen Fillery and Chris Smethurst (25 – 5). On Saturday in the mixed game against Wingrave, an equally impressive win 87 - 66, top triple was Gill Henderson, Sylvia Warrington and Chris Fillery (22 – 8).

In the first men's match of the season Chesham were up against London Welsh. Always a difficult team to beat, Chesham did manage to win 2 rinks and draw on another, but lost the match 115 – 154. Chesham did have a top rink, Malcolm Warwick, Robbie Williams, Tony Strudwick and Keith Patrick (22 – 18).