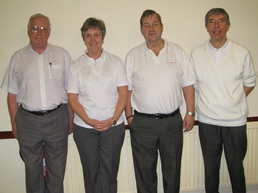 Chesham team of Jane Evans, Malcolm Warwick, Keith Patrick and Bill Faulkner won the County Fours championship competing against teams from all over the county, and now go on to represent
Buckinghamshire at the English Short Mat National Championships to be held at Bromsgrove in April.

A record number of Chesham players have got through to the National Championships this year - others being Keith Patrick and Bill Faulkner in the pairs.  Howard Cave and Keith Patrick, with Paul Knight of Sands BC won the County Triples competition.   Also in the triples Malcolm Warwick teamed up with Bellingdon players Tony Rixon and Arnie
Jaffe to come third in the triples competition and they are also off to the
National Championships.