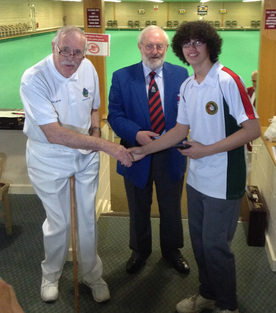 Nathan Harvey and his sister Courtney Harvey of Chesham Bowling Club and Foxhills qualified for the English Youth Bowls Development Scheme Regional finals held at Mid Glos on 13th April 2013. They along with Michael and Matthew Barton and Tyler Wooton (also of Foxhills bowls club) were representing Buckinghamshire. (Matthew Barton is the grandson of Lyn and Brian Wright- ed)

Michael and Tyler competed in the over 15's category and put up a tough fit against a very competitive field, and represented Bucks very well.

In the Junior section were Nathan and Courtney Harvey and Mathew Barton, Mathew and Courtney bowled very well and beat some tough competitors and both just missed out on gaining a semi final place.

Nathan won all of singles matches and also finished top in his skills assessments which qualified him for a semi final place, the semi finals and final were played over 7 ends with 3 woods. Nathan went 6-0 down after 3 ends in the semi final but dug in deep to come back to a 7-6 win against Alex White from Gloucester.

The Final was between Nathan Harvey and Tom Holmes of Hereford (Tom had beaten Nathan sister Courtney in the earlier competition).  Nathan got off to a small lead 3-0 after 3 ends and stayed in control to win 5-4 and not needing to bowl his last wood.

Nathan is the first bowler from Bucks ever to win the Regional finals and now qualifies for the national finals in Melton and District Indoor bowls Club in October.