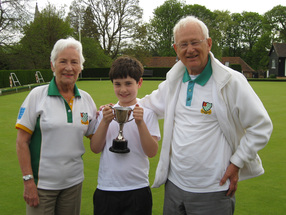 Daphne presenting the cup to Thomas and Chris
Chesham Bowling Club's Australian Pairs competition held on the Bank Holiday Monday produced the youngest ever winner of a trophy at the club. Thomas Roker, aged 10, was paired with club secretary Chris Fillery and they went on to win the competition. Australian Pairs is a format where players alternate between lead and skip bowlers, so Thomas really had to play his part. The pair won the first match 15 – 1, and went on to win overall by 3 shots.

Thomas and Chris won the Cameron Cup, presented to the club by Daphne Halsey for the competition, in memory of her grandson Cameron who was a young bowler at the club.

On Saturday, Chesham played the first leg of the Jubilee Cup against Princes Risborough. Chesham took an early lead in the match, but Princes Risborough fought back to within one shot, Chesham just winning 128 – 127, so all to play for in the second leg in June. Top Chesham rink was George Perry, John Redwood, Ashley Ware and Captain Peter Horton (35 – 13).

The other friendly over the weekend was against Iver Heath, and in a rain affected match, Chesham won 117 – 95, top rink Derek Puddephatt, John Shepherd, Colin Parsons and Keith Patrick 31 – 10.