Chesham Four off to Worthing 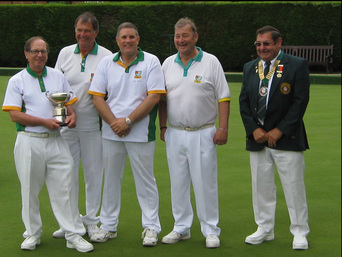 Chesham four Howard Cave, Chris Harvey, Ray Keen and Keith Patrick reached the final of the County Fours, winning in the semi-final against Aylesbury Town, and so are off to represent Buckinghamshire in the National Championships at Worthing.

However, on Saturday, they lost the final against Princes Risborough. It's the second year running that the team have lost in the final.

The Chesham green was chosen as a neutral venue to host a Middleton Cup quarter final – Oxfordshire v Berkshire, which Berkshire won to go on to the semi-finals at Worthing.

In the Vi Trundell ladies competition, Chesham had a good win against Marlow. At home the team of Fay Green, Helen Fillery, Pat Rodgers and June Holland won 23 – 19, coming back after a slow start to win, and the away team Jean McNab, Barbara Strudwick, Terri Keen and Lin Wright had a resounding 28 – 6 win.