Courtney to play in Amy Rose competition at Leamington 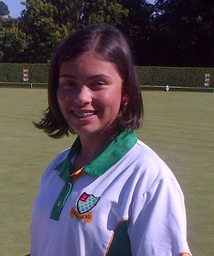 Courtney Harvey is in the Buckinghamshire Team for the Amy Rose competition at the National Bowls Finals at Leamington. The Amy Rose is a Women's 31’s & Under Inter-County Double Rink Competition. Courtney, 13 years who attends the Misbourne School, is the youngest player in the squad.

Courtney has also played for Buckinghamshire in all the John's Trophy games this year, the premier county competition, and is the youngest player to ever have been selected for the county team.

Chesham ladies are through to the quarter final of the Vi Trudell competition, to be played on Sunday 18th August.

Sunday saw the second leg of the Tosh Clarke Cup against Herts BC. Chesham carried a 16 shot advantage into the away leg, so although Herts won on the day by 81 – 72 it was not enough to prevent Chesham retaining the cup for another year. Chesham's winning rink was Richard Atkins, George Fudge, Howard Cave and Alan Cohn 25 -11.

On Saturday, however, Chesham lost to away to Bushy 102 – 122, but did have a top rink of Barbara Strudwick, Molly Young, David Staples and Daphne Halsey 23 – 15. Chesham were also on the losing side in a ladies triples at Princes Risborough 40 – 61, top triple was Mo Bailey, Vi Coppin and Chris Smethurst 19 – 13.