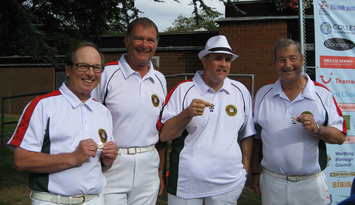 Chesham Four, Howard Cave, Chris Harvey, Ray Keen and Keith Patrick were in action at the National Championships at Worthing this week and had a good run. On the first morning they beat Huntingdonshire 17 -15, and then in the afternoon Wiltshire 24 – 12 to make it to the last sixteen.

On the following morning the team just missed out on a quarter final place by loosing narrowly to the eventual winners of the competition Cambridge by only 3 shots 24 – 21.

In the Ladies County Finals day at Chesham, Avril Harland won the 2 Wood Competition winning against team mate Pat Rodgers by just one shot on the final end.

Chesham Ladies are through to the Vi Trundell Semi Finals – winning their quarter final against Hazells at Waddesdon. Scores were Jean McNab, Barbara Strudwick, Terri Keen and Lin Wright 21 – 17 and Fay Green, June Holland, Avril Harland and Pat Rodgers 26 – 11. The Semi Finals and Finals are to be played on Sunday 8th September at Long Crendon BC, where Chesham is drawn against Bletchley Town in their first match.

In friendlies Chesham won at home against Burnham 102 – 86, with top rink Lyn Birch, Brian Skuse, Helen Fillery and Chris Fillery 30 – 14. However a reverse against Owls on a heavy green at Watford, Chesham going down 93 – 140, but did have a top rink of Richard Atkins, Jayne Denham, Mike Bailey and Tony Holt 23 – 19.