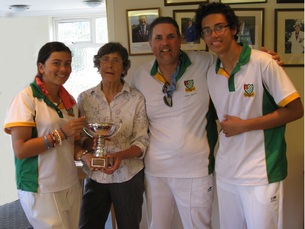 Chesham's annual 3-2-1 competition, where teams of 3 play triples, pairs and singles throughout day resulted in a win for the Harvey family with Courtney, Nathan and Chris Harvey in the winning team. Second were Pam Hooper, Shirley Gardiner, and Roger Elliston, third Jane Evans, Howard Cave and Peter Horton. Jean Queripel presented the cup to the winning team which was given in memory of her husband John, who introduced the competition to the club some 20 years ago.