Winners in both Vi Trundell and Chiltern & Thames Comps 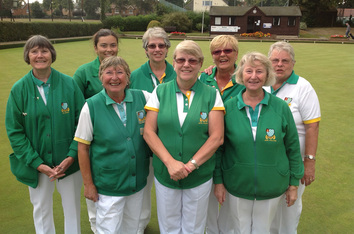 There was double success on Sunday for Chesham in County Competitions where the whole day was taken up with semi-finals and finals.

In the ladies Vi Trundell double rink competition, played at Long Crendon, Chesham won on both rinks against Bletchley Town in the morning and then in the afternoon in the final beat Stoney Stratford, again winning on both rinks. Courtney Harvey, June Holland, Avril Harland and Pat Rodgers won 24 – 12 and Jean McNab, Fay Green, Terri Keen and Lin Wright won 21 – 15.

Meanwhile the Chiltern and Thames mixed triples league played at Harrow was a closer affair. In the morning Chesham won against Harefield by 12 shots and then went on to play Fassinage in the final. The match was all square going into the final end, which Chesham managed to win by two shots to take the trophy. Scores in the final were Shirley Gardiner, Chris Harvey and Ray Keen 24 – 17, Geoff Denham, Sylvia Warrington and Mick Skerry 17 – 24 and Jane Evans, Howard Cave and Keith Patrick 15 – 13.

In another friendly at Wendover, Chesham lost by 97 - 110, but did have a top rink of Toni Nightingale, Roger Lofty, Keith Hewitt 23 -17.