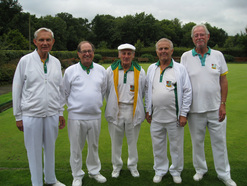 Chesham were well represented in the finals of the Watford and District Veterans competitions played at Oxhey Bowls Club, with both the single and pairs finals being all Chesham affairs. In the singles Howard Cave won against Alan Cohn and in the pairs Geoff Denham and Norman Green won against David Staples and Alan Cohn.

The last of the men's county finals were played at Chesham on Sunday. Both the semi final and finals of the Benevolent Triples and Secretary's Cup were played with Chesham having representatives in each. In the Benevolent Triples Peter Horton, Brian Wright and Roger Elliston won in the semifinal against Slough but lost in the afternoon's final to Stoney Stratford 11 – 15. Similarly Ray Keen lost to Brian Clark of Aston Clinton in the final of the Secretary's Cup.