Jubilee Cup against Wycombe - Farewell to Bill and Maureen Faulkner

The first round of the Jubilee Cup contested with  High Wycombe took place on Sunday, and Chesham came back with a resounding win of 36 shots to take into the second leg in July.   Chesham's top rink was Fay Green, Margaret Denham, Tony Holt and Brian Wright who won 33 - 11.

Ladies captain Margaret Denham was also on winning form at High Wycombe earlier in the week when the ladies won 56 - 43 in their triples match, top rink being Mo Bailey, Coral Sills, and June Holland 24 - 14.   However, the ladies suffered a close defeat at Princes Risborough 32 - 35, with top rink of Pam Hooper, Coral Sills and Margaret Denham 14 - 10.

The men's match at home against Hemel Hempstead also was a win for Chesham, 90 - 69, top rink being Martin Blackman, John Henderson, Trevor Bateman and Chris Fillery 24 - 12. 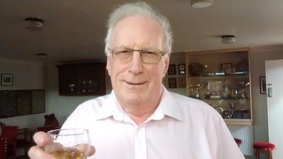 The weekend ended on a nostalgic note as Chesham members said farewell to Bill Faulkner.   An evening was spend reminiscing over anecdotes and achievements of Bill's 45 year bowling career of which the last 10 years have been has been spent at Chesham.   Members wished them well as Bill and Maureen relocate to the south coast.