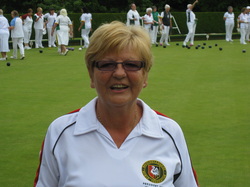 Terri Keen from Chesham is this year's Lady President of the Buckinghamshire Bowling Association, and Friday was her President's day.    Lady bowlers from 42 clubs in Buckinghamshire gathered to celebrate the event, together with 13 past presidents and representatives from Bowls England.  It's a special year for Chesham as husband Ray Keen is the Men's President this year, in the association's centenary year.   It's the first time husband and wife have held office of President in the same year.

The regional rounds of some of the County Competitions have been completed, and David Sills has won through to the semi-final of the Unbadged Singles.  Chesham had two teams in the quarter finals of the Ladies fours.   Courtney Harvey,  Lin Wright, Terri Keen and Pat Rodgers won their quarter final match against Princes Risborough but lost in the semi-final to Bletchley Town.  The other four of Fay Green , Sue Faulks, Avril Harland and Sue Springall beat Woburn Sands and then Iver Heath in the semi-final to win through to the final and will now go on to represent Buckinghamshire in the National Championships at Leamington.

In matches this week Chesham played the first leg of their annual Challenge Cup against Marlow, winning by just one shot 97 - 96.   Top rink was Jean McNab, David Hobbs and Norman Green 21 - 14.  However, losses in the two other matches played this week.   At Gerrards Cross, Chesham lost 95 - 129, but did have a winning triple of Martin Blackman, Jean McNab and Trevor Bateman 24 -1 6.  Also at Aston Clinton, a narrow loss by 105 - 110, with top triple Toni Nightingale, Vi Coppin and Trevor Bateman 28 - 7.