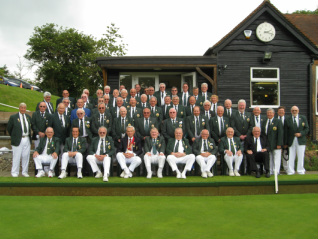 Dennyside Bowling Association has for many years raised money for charities and good causes.  This year's president is Lawrie Smethurst of Chesham Bowling Club.   On Monday Lawrie hosted his premier event of the season, the match between President and Deputy President, Brian Tarrell.

Members of the association came from all over the south, from Cambridge to Somerset to take part in the event.  After an entertaining game, the members heard a moving presentation from Lawrie's daughter, Kate, on the work of the Addenbrooke's Charitable Trust.  This organisation helps children feel at ease with their routine and sometimes invasive medical treatment, a charity which Lawrie decided to support after his grandson was treated in the Paediatric Renal Unit there.

Dennyside members generously contributed £2,100 to the Trust.   They will return later in the season in a match with Chesham, and will then support the Chesham Captains' charity.