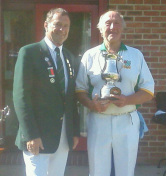 On Saturday David Sills won the County Unbadged singles championship.   In the semi-final, the previous day, David had a good win against John Howlett from Bletchley St Martins BC (21 - 14) and then in the final at Iver Heath played Neil Thompson of Hazels BC and won 21 - 15, completing a really good season for David. 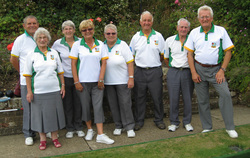 Then on Sunday, Chesham C team won the Buckinghamshire/Oxfordshire Zone Final of the Tony Allcock trophy  - mixed Over 60s Double Rink.   Opponents Stony Stratford raced to an early lead, but Chesham fought back strongly to win by just one shot, with Sue Springell bowling the winning shot with her last wood.   Scores were Sylvia Warrington, Tony Strudwick, Roger Elliston and Lin Wright 27 - 25, and Terri Keen, Geoff Denham, Roy Rodgers and Sue Springell 20 - 21.  Chesham are now at home to Broadway Bowls Club (Worcestershire) in the Area Final, the winners going through to the National Championships at Leamington.

In other games this week, Chiltern & Thames Association brought six rinks from the teams who compete for the trophy to play against Chesham as last year's winners for a celebration friendly.  Chiltern & Thames were the winners on 5 rinks, overall score 103-127,  with the one rink from Chesham winning 23-12 - Helen Fillery, Brian Cox, Lyn Birch, Roy Rodgers.

However on Sunday, High Wycombe beat Chesham in the annual Benevolent Cup match by an aggregate score of 13 shots over the two legs.  The only winning rink for Chesham was Derek Puddephat, Toni Nightingale, Eileen Perry and Norman Green 19-18.